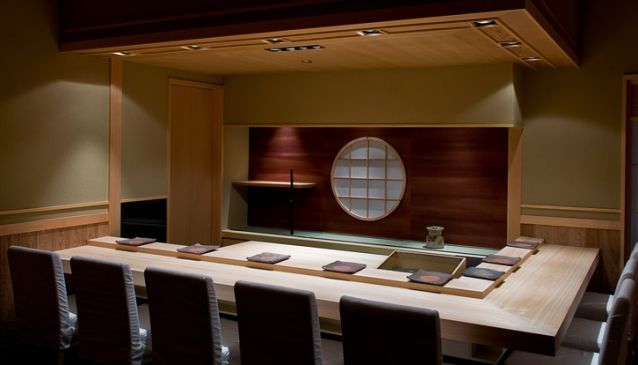 In a minimalistic interior space designed by Junzo Irikado and housed within the historic Raffles hotel, Shinji by Kanesaka is one of the most refined sushi restaurants in Singapore. Helmed by Two-Michelin-Star Shinji Kanesaka, it is Master Chef Koichiro Oshino and his team who bring the magic of the Kanesaka experience to the table.

The standout dish of the restaurant is the Five-hour steamed Hokkaido abalone.

For lunch the Setsugetsuka Sushi Course Sets are available from S$75++ to S$180++ and come with a variety of Nigiri sushi, maki sushi, soup and dessert. Let the artist design your feast with the sophisticated Omakase sets, which range from S$250++ to S$450++.

Shinji by Kanesaka is Chef Kanesaka's first venture outside Japan and it honours the same prodigious quality that made him an esteemed character in the culinary world.

Shinji by Kanesaka was ranked No.32 at the San Pellegrino World's 50 Best Restaurants 2014.