The higher you toss, the greater will be your fortune

Myriam Ohlig for My Guide Singapore
During the Chinese New Year festivities, there are tons of auspicious delicacies and treats enjoyed at home and at work. But the most popular Chinese New Year dish in Singapore, which is mostly found here and in Malaysia, is certainly the sweet and fresh Yu Sheng salad. Traditionally eaten on the 7th day of the Lunar New Year calendar -called Ren Ri (人日) - on Thursday 6 February 2014- and known as the day when man was created-, the Yu Sheng is now widely eaten throughout the whole festive season.
This is not an ordinary dish. Besides being a light, quick and easy salad recipe, sharing a Yu Sheng among families, colleagues and clients during the Lunar New Year season, is believed to bring good fortune and prosperity to those present at the table. All you need to do is to pick the right auspicious ingredients, recite the right sayings as you add them in, then toss the salad in a very auspicious way.
Although the amount of ingredients can vary from a restaurant to another, we’ve chosen the most popular 12-ingredient Yu Sheng recipe. In this edition of My Guide Singapore Kitchen, you’ll learn the meanings and the sayings behind this joyful tradition and how to toss the Yu Sheng like a local so that next time you’ll have the chance to partake to a Yu Sheng Lo Hei in Singapore, you’ll be blessed with the whole amount of good fortune and prosperity possible and you’ll even be able to impress your friends and clients with some auspicious sayings. 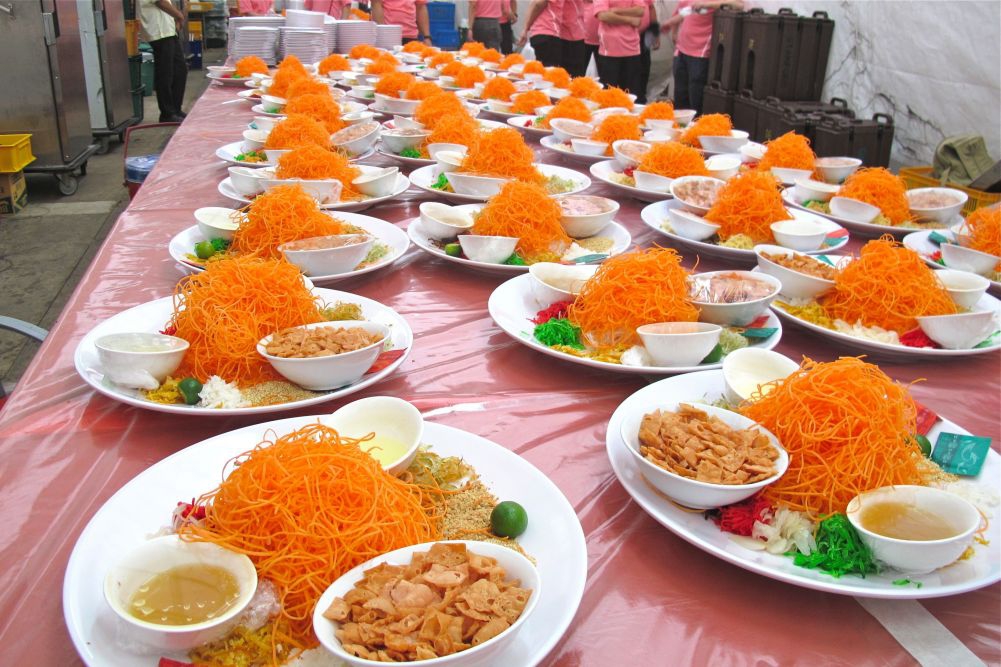 The origins of the Yu Sheng salad traced back to the time when a raw-fish salad was eaten in the province of Guangdong in China to celebrate the day when man was created -Ren Ri (人日)-.  Brought to the South East Asia region by the Teochew population who migrated there, the dish consisted of raw sliced fish and shredded vegetable only seasoned with oil, vinegar and sugar. The modern version which has become a tradition typically Singaporean, was introduced by four local master chefs in the early 60s. Tham Yew Kai, Lau Yoke Pin, Sing Leong and Hooi Kok Wai became so popular with this recipe that they became known as the “Four Heavenly Kings” in the Chinese culinary world. 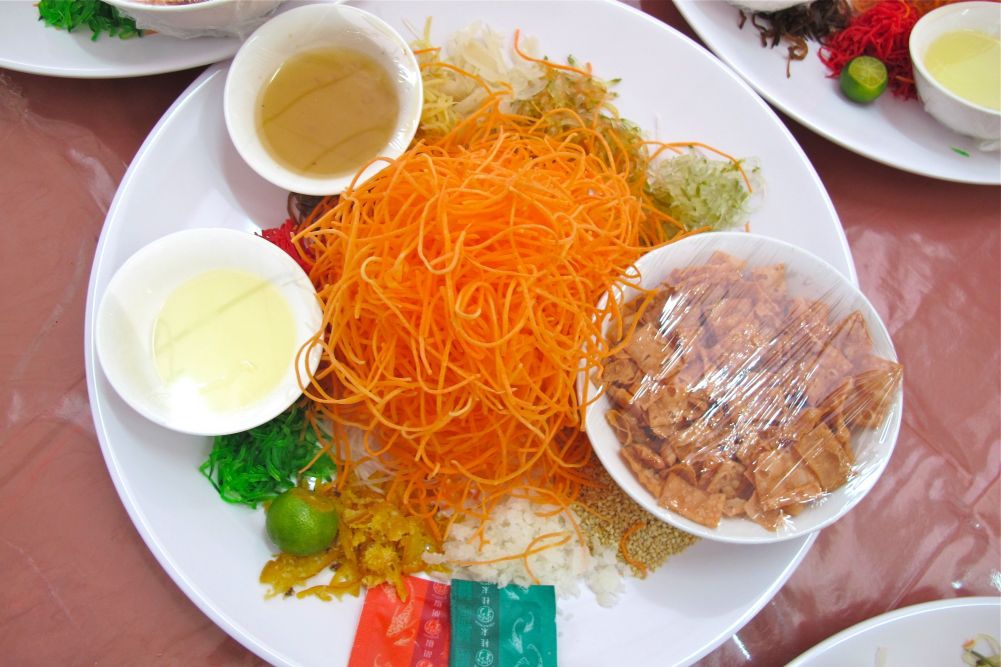 Although some Yu Sheng recipes can include not less than 27 auspicious ingredients and some Chinese restaurants replace the fish by some more desirable ingredients such as lobster or abalone, we’ve chosen here a popular version with 12 ingredients, which each a special meaning. These ingredients are available in any grocery store except perhaps for the Pok Chui Crackers that you’ll certainly find at your usual Asian grocer. 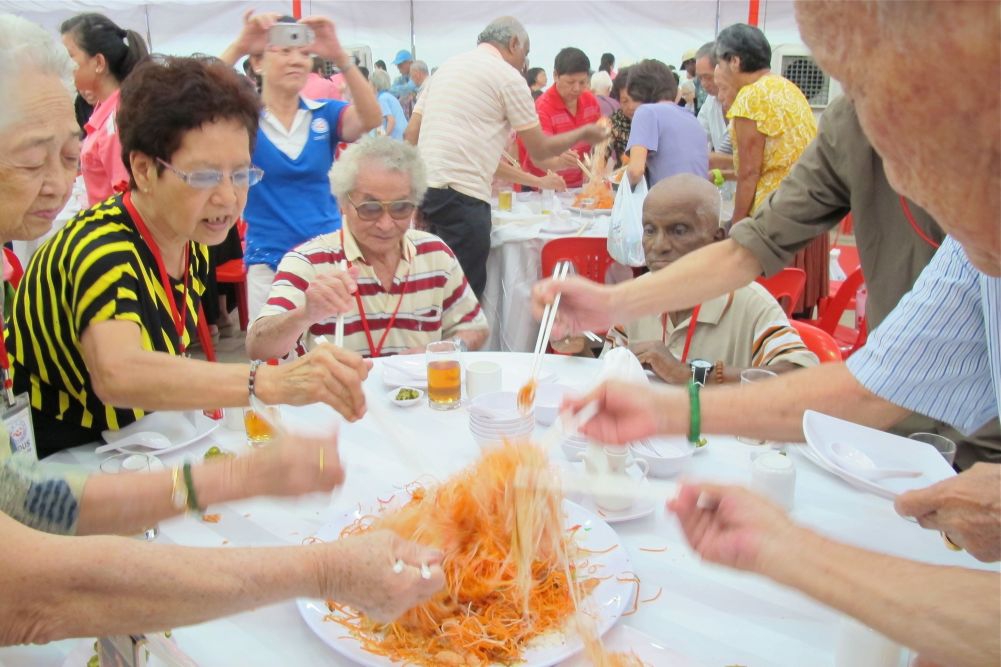 Once all the ingredients have been beautifully arranged on a large plate, it’s time for the most exciting part of the tradition, the mixing and the tossing of the ingredients.
Equipped with their chopsticks, all gather around the table and listen closely to the waiter at the restaurant or the person in charge in the family as he adds each ingredient carefully and recites each specific prosperous saying.
if you would like to impress your friends, you may recite the sayings mentioned below in Mandarin characters or using their pinyin version. Just make sure you use the right intonation as it may change the meaning of your sentence.
When using the pinyin system remember to use the 4 main intonations of the Mandarin language: - (High tone - high and flat-), ˊ (Rising tone), ˇ (Dipping tone - short fall then rise-), ˋ (Falling tone).
This is how we do the Yu Sheng Lo Hei in Singapore in 13 steps:

The higher you toss, the greater will be your fortune. So don't worry if it gets a bit messy and join the fun Yu Sheng Lo Hei!

Although the preparation is extremely quick and easy, you can also find the whole Yu Sheng platter in many grocerie stores in Singapore at a very reasonable price. Yet, the whole atmosphere of a local Chinese restaurant is very tempting. It is available in several variations and various price but you'll find the original version at the Lai Wah Restaurant on Bendemeer Road (Boon Keng MRT station), which was the world's 1st restaurant to serve Chinese New Year Yu-Sheng in 1964 and which celebrates its 50th anniversary this year!

We recently joined the annual Mass Reunion Dinner during the Chinese New Year celebrations, for which 1,000 underprivileged families and elderly from Chinatown were invited to join the Lunar new year festivities with a warm and healthy dinner. Watch this video and see how they enjoyed the Yu Sheng Lo Hei.