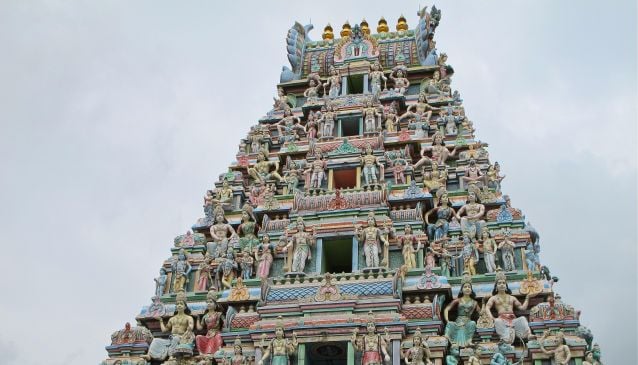 Located in the Little India district of Singapore, just a few meters away from the famous Mustafa Shopping Centre, the Sri Srinivasa Perumal Temple is one of the oldest temples in Singapore and the largest of all.

The infamous Gopuram tower examples the numerous incarnations of Lord Vishnu. This dedication to Vishnu dates back to 1855 when a group of Hindu leaders built a simple brick building on a land purchased from the East India Company.

Previously, a stream lead into the temple and was an important source to ritually cleanse before beginning worship. Now, inside the temple's inner courtyard, a well marks the spot where the stream used to flow. There is also a Tulasi plant, otherwise known as a basil plant, that now sits inside and serves as the Hindus' symbolic holy bush.

The main deities of this temple are Lord Vishnu, and Lakshmi, goddess of wealth.

Sri Srinivasa Perumal temple is the starting point for religious devotees at the annual Thaipussam festival all of which is done in dedication and gratitude to Lord Murugan.

During the festival of Deepavali, the temple serves breakfast and special Indian sweets to huge crowds joining the prayers. In the evening, devotees will carry deities on a chariot around the temple.

- Wear suitable clothing such as long trousers for men and long skirt/dress/trousers for women. Shoulders should be covered with a sleeved top.

- Remove your shoes before entering the temple grounds

- Respect cordoned off areas as they might be taboo for non-Hindus.