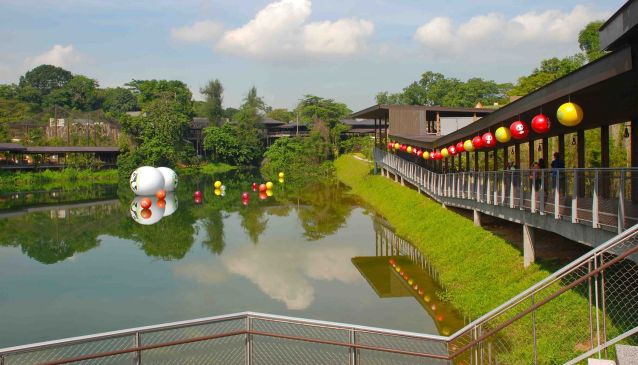 Under the threat of pollution, industrial exploitation and overfishing, freshwater habitats have been dramatically disappearing these last years. River Safari, the latest attraction of Wildlife Reserves Singapore, aims to raise awareness for its conservation through an epic journey down the eight most important rivers of the world.

Covering 12 hectares with a total of 34,000 m3 of water in Upper Seletar Reservoir, River Safari is a vast haven for 150 plant species, 300 animal species and 5,000 animal specimens with 42 endangered species. The latest attraction of Wildlife Reserves Singapore, invites visitors to stroll through fresh water galleries, walk-in aviaries and even board an open-top boat cruise to discover and then cherish the freshwater wildlife. The main highlights of River Safari are:

-Giant Panda Forest . Meet Kai Kai and Jia Jia in our video of River Safari and its Giant Panda Exhibit

-And eight rivers of the world:

Mekong River, the 'Mother of all Rivers'

Congo River, the deepest river on earth (with 230 meters in some parts)

River Nile (River), The longest river in the world

Amazon River (South America), the largest and second longest river in the world.

River Safari features 2 VIP rooms and 1 outdoor space, which are available for rental.

River Safari welcomed its first visitors beginning of April 2013 for a soft opening. The Wild Amazonia will open later this year.

Check River Safari's website to find out about the different Park-Hoper packages, which allow you to visit several animal parks for less.