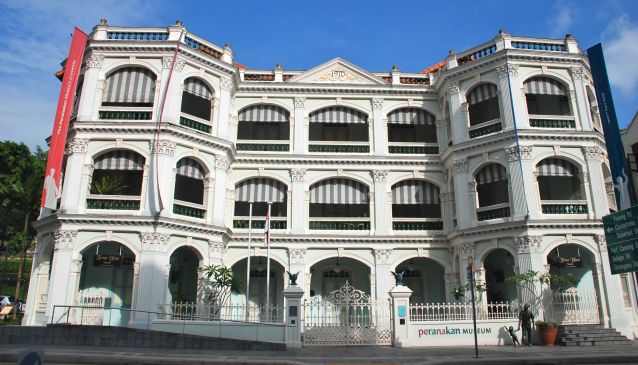 Within walking distance from the Central Fire Station in the Civic District, discover the Peranakan Museum.

The rather intimate museum has one of the most superb and wide-ranging collections of Peranakan objects produced during the flourishing period of the Peranakan culture: Splendid hand carved teak furniture, impressive religious altars and the famous nonyaware, this fine porcelain painted in pastel colours often with crane and floral designs. Also on display are some unique pieces of rich wedding garments and some elegant clothing such as the sarong and the kebaya, this alluring blouse with embroidery, which has become a prominent symbol of the Peranakan identity.

The museum features several galleries over three floors showing illustrations and cultural traditions which are enthralling and providing both an educating and stimulating experience for all ages.

This particular museum is a component of the Asian Civilisations Museum and operates under the National Heritage Board. Watch our photos, virtual tours and video of the Peranakan Museum and be inspired.

Admission Tickets: Adults S$6; Free admission for visitors aged 6 and below. Free for all Singapore Citizens and Permanent Residents all year round to the permanent galleries and some selected special exhibitions.

50% discounted admission for foreigners aged 60 and above and for all on Fridays from 7 - 9pm.