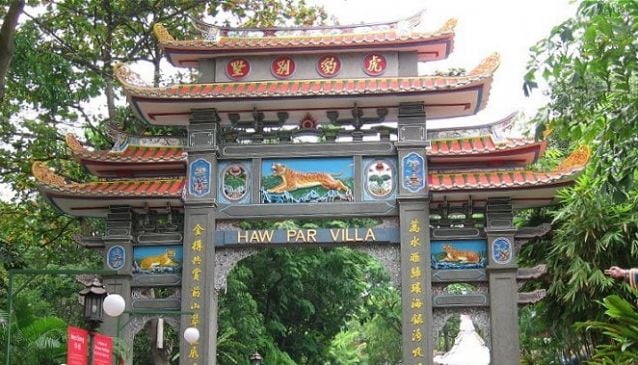 Situated in the southern part of Holland Village, Haw Par Villa, also known as Tiger Balm Gardens, is one of the most unusual places found in Singapore. It was built in 1937, by the rich Burmese Chinese Entrepreneur Haw Boon Aw (1882- 1954) for his brother Boon Par (1888-1944). The Aw brothers were the brilliant entrepreneurs responsibile for the famous pain-relief ointment Tiger Balm.

Haw Par Villa emphasise the importance of Chinese traditions and family harmony. A two-hour stroll through the park will make a good introduction to the Chinese Buddhist beiliefs with more than 1,000 colourful statues of Chinese deities, Buddha, legendary characters and personalities such as Confucius and Laughing Buddha. The most popular exhibit of Haw Par Villa is The Ten Courts of Hell, which explain the Buddhist belief regarding death and reincarnation. Yet, this part of the park might be too disturbing for the sensitive souls and young children.

Haw Par Villa doesn't carry any food and beverage facilities but could be a nice place for a picnic.

Please make sure to bring your hats and water bottles as the place can get very hot.

The Ten Courts of Hell Opening Hours: 9am to 6pm.