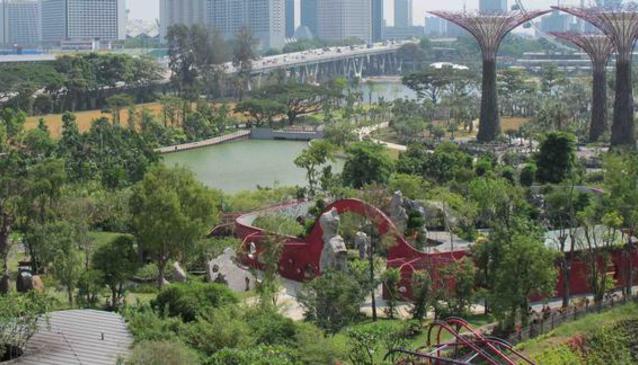 Gardens by The Bay - Singapore

Directions to Gardens by The Bay

Greening the city in Singapore was a project envisioned and established by Minister Mentor Lee Kuan Yew . When he founded the country in the 60s he understood early enough that trees, shrubs, flowers and parks were important to raise quality of life but also to preserve the country's biodiversity. Hence when economic survival was no longer an issue, he transformed the concrete and steel Singapore into a concrete, steel and garden city. Today, with its parks and gardens and 50 per cent of the country being covered by greenery, Singapore is considered as one of the greenest cities in the world.

The mega attraction Gardens by the Bay, by its close proximity to the Central Business District contributes to further transform Singapore from a 'Garden City' to a 'City in a Garden', offering Singaporeans a vast heaven of greenery, where they can rest, relax and recharge. Created from reclaimed land, the national gardens showcase the best of tropical horticulture and garden artistry throughout its 3 gardens: Bay East Garden, Bay Central Garden and Bay South Garden, which was opened to the public on 29 June 2012.

With its 54-hectare Bay, South Garden is the largest portion at Gardens by the Bay. This innovative project, designed by the UK-based Grant Associates, showcases plants from all continents except Antartica. The key features found at Bay South Garden:

The Cloud Forest, the other cooled conservatory replicates a cool-moist climate that can be found at Mt Kinabalu in Sabah, Malaysia and in some part of South America and Africa. You'll feel awe when contemplating the 35-metre mountain embellished with cloud forest vegetation, romantic gardens, unique walkways and a 30-metre man-made waterfall. Many of the species featured in the cooled biomes are threatened by climate change and habitat loss. Hence visitors are provided with high-tech interactive media and educational programs, which will enrich their botanical knowledge and raise their environmental awareness.

The Supertree Grove is made of 18 Supertrees, which are vertical gardens as tall as 9 to 16 storeys (25 to 50 metres). They offer beautiful lighting at night and when plants will have grown sufficiently, they will provide shade and shelter during the day, but not only that, they also have environmentally sustainable functions. Some have photovoltaic cells to collect solar energy used for their lighting at night while others serve as air exhaust receptacles contributing to the cooling system of the 2 cooled conservatories. The Supertree Grove has already become one of the greatest symbols of Gardens by the Bay.The 22-metre high OCBC Skyway is a must try! Hung at the Supertrees' branches, the aerial walkway offers the most ravishing scenic views of Marina Bay and Singapore's Skyline.

Another great feature of Bay South Garden at Gardens by the Bay is the Dragonfly Lake. Bordering the west side of the gardens and facing Marina Bay Sands, the lake is designed for integration with the adjacent Marina Reservoir. Many types of water plants are featured in the lake, such as free-floating, emergent, immersed and other various types of aquatic plants, which contribute to the healthy functioning of our ecosystem.

Besides all these state-of-the art designs and sustainable systems featured in Gardens by the Bay, stand the more conventional Heritage Gardens and World of Plants, where you'll learn about the tropical plants and their traditional usage. While wandering around, you'll meet families and aunties, dreamers and lovers and if you go for a further walk, you'll reach Marina Bay Sands through the Dragonfly Bridge.

There's so much to be seen in Gardens by the Bay not to mention the wide offering of dining options and entertainment such as the daily lighting show OCBC Garden Rhapsody (7.45pm and 8:45pm) and this is only the beginning. There's also a play area for your children called Far East Organization Children's Garden. It includes a Toddler Play Zone, Rainforest Tree Houses and a waterplay (So don't forget your kids' swimsuits!). This playground is opened daily except Mondays from 9am to 9pm.

With its 4 prestigious spaces- The Flower Field Hall, Waterview Room, Silver Leaf and The Meadow, Gardens by The Bay is also a prime destination to hold top class events.

Free admission to the outdoor gardens. Charges apply for the cooled conservatories and the OCBC Skyway.